Gerben Law Firm provides trademark services to game designers and developers around the U.S. and world.

In today’s digital world, board games are thriving. There has been a boom in the board game industry over the past ten years and with new funding streams as well as a growing base, the board game industry looks to continue its renaissance. At the heart of the boom has been new game designers and companies exploring new mechanics, rules and themes for new games (and new takes on old games, like Risk: Legacy.)

However, I’ve found that game developers are not always effective at protecting their trademarks and other IP.

I recently met a game designer working on his first game. He had been working on the game for several years and his prototype looked beautiful. When I asked him about his trademarks, he hadn’t even considered it. He had likely spent thousands of dollars already on the prototype, travel and marketing and was about to launch a Kickstarter to finally scale up to a full release. Yet, he hadn’t even thought of trademark protection.

Most game designers know that picking a good name is essential for the long-term success of a game. However, many are too busy developing game mechanics, play testing and creating new and exciting assets for their games and rarely think about protecting their trademarks.

This is surprisingly typical for not just new game developers, but of many small businesses. With the pressures of developing a new product or business, trademark protection is often low on the list, if it’s even on the list at all.

There are four main questions game designers should ask themselves before investing heavily in a new game:

By protecting a game’s name early, game designers will be able to invest in marketing, community engagement and more without worrying about whether their brands will be damaged by a competitor.

1. What are my trademarks?

The first question is often the trickiest part. How can you protect something you don’t even know you have? A trademark can be anything that represents a company: a name, phrase, design, symbol. It can even be unique product packaging, sounds, and much more.

When in doubt, start at the top: the name of the game. When customers think of your game, this is likely the first thing that they will think of. If a competitor (in the board game industry, but also beyond, into card games and even computer games/video games) is already using a similar name, then you, as a developer, will face significant challenges.

Once the name has been protected, it’s important to think about your logos and any slogans that may be important to your overall brand. You can also think about protecting the ‘look and feel’ of certain aspects of your game or packaging, which is called “trade dress.”

Almost anything can be a trademark, including sounds, color combinations, and even movements.

2. Can I protect the name of my board game?

Once you identify your trademarks, you have to determine whether you can claim exclusive rights in that trademark. If not, then it may be worth considering a different name (or focusing on other elements or designs that can be protected as your exclusive trademark.)

There are two things to consider:

Is my trademark distinctive?

Is anyone else using a confusingly similar trademark for their game or related goods and services?

Answering these questions is not easy – a trademark attorney with experience in the industry can make the process easier and help avoid pitfalls when it comes to your intellectual property.

Is my trademark distinctive?

In order to protect a trademark, it must be “distinctive,” meaning that is cannot be merely descriptive (or generic) for the product you are selling. For example, “Deck Builder” would be generic within the industry, as its is simply a game mechanic. No one would be able to claim exclusive rights (and stop others) from using the phrase “deck builder” to accurately describe their own product. ‘Chess’ and ‘checkers’ are also examples of generic game-types.

In short, generic words and merely descriptive words are not trademarks.

However, descriptive words can become trademarks through market penetration and advertising. This is called “acquired distinctiveness.” For example, if you had a game called “Four-in-a-Row,” it would likely be descriptive for a game in which the objective was to get “four in a row” of an object. However, if this game was a hit and you were able to show (through evidence) that consumers only think of your game when they see “Four-in-a-Row,” then it may function as a trademark at that point.

The strongest category is “arbitrary” or “fanciful” trademarks. These trademarks have no prior connection to something that consumers would already know. “Gloomhaven,” for example, is an arbitrary name that would act as an inherently strong name. A fanciful name like “Cerebria” would also act as a strong trademark.

Why are arbitrary marks stronger than suggestive marks? Think of this – with an arbitrary mark,  consumers have nothing to use to remember or connect with your name. If you like westerns, Western Legends tells you, at the very least, the theme of the game. However, something like Gloomhaven doesn’t tell you anything about the game – therefore, when you do get consumers to form a connection, it’s with your name only. It’s a powerful source identifier and you are permitted to stop competitors from getting anywhere close to your trademark.

But the analysis doesn’t stop there.

Is anyone else using a confusingly similar trademark for their game or related goods and services?

Next, you must consider whether the name you’ve chosen is confusingly similar to an existing trademark. This is by far the most difficult analysis to make, because it challenges many of the conceptions that game developers have about the scope of their industry. While the tabletop and eurogaming communities can feel insular, the industry reach, in general, is widespread and global.

When analyzing a trademark, you will need to see if any prior user in the U.S. has used (or has applied to use) a “confusingly-similar” trademark for “related” goods and services.

Confusingly similar does not mean identical – it means similar in sight, sound, meaning or overall consumers impression. If a competitor released Bloomhayven, it would likely be confusingly similar to Gloomhaven, even though it is visually distinct. This analysis is extremely difficult and is an analysis that should be done by an experienced trademark attorney in order to gauge the level of risk. 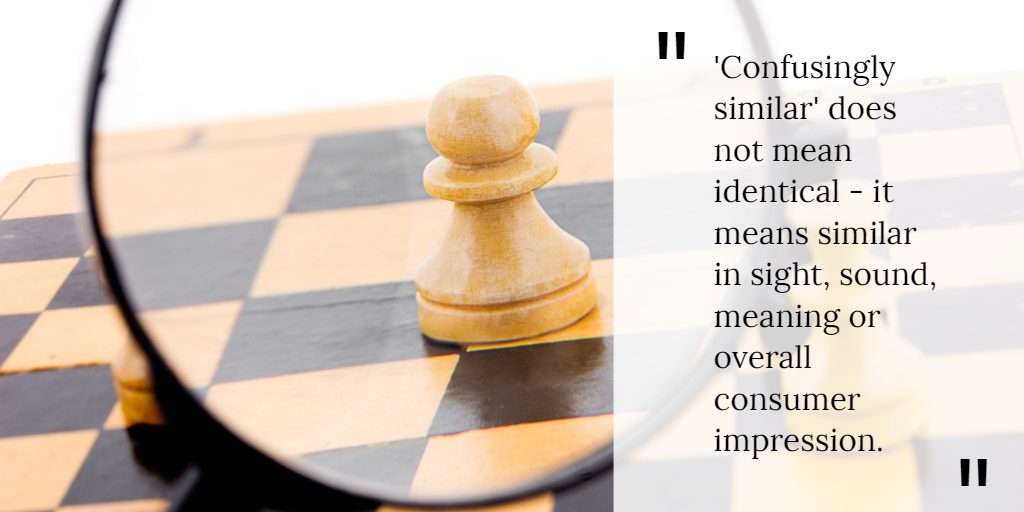 In a similar vein, “similar goods and services” doesn’t mean identical. “Similar,” in this instance, means that consumers would believe that one company made or offered both products or services. So, a company that makes table-top RPGs is likely to also make card games, so tabletop RPGs and card games are likely related. Riot Games, makers of League of Legends, also created Mechs vs. Minions – so are computer games related the board games? In some cases, yes, but each case is decided on a case by case basis.

To further complicate things, any given trademark might have a different scope depending on the strength of the trademark (see above) and the market awareness it has. The stronger a trademark, the wider the scope of protection. This is a detailed analysis and, as mentioned above, it can be subjective. An experienced attorney can perform a risk analysis and highlight potential issues.

When is the right time to file a trademark for my board game?

But when do you apply for a trademark? Timing is important here – but the short answer is usually “as soon as possible.” Common law (unregistered) trademark rights begin when your game is officially being sold to consumers (or, in some cases, when a near-final prototype is being sent to reviewers or given away to customers.) But what happens if someone else starts using a similar trademark in the meantime?

There is a common misconception that “trademark use” means that you’ve begun promotional activities for your game. However, “trademark use” specifically means “use in commerce,” meaning that you have the product in the marketplace, being purchased by real customers in regular channels of trade. Even launching a successful kickstarter campaign is not typically enough to show proof of commercial use.

An “intent to use” application allows you to file early and protect your rights before you begin a serious marketing push. It can be “pre-approved” by the government so you can proceed more confidently in your crowdfunding or marketing activities.

I registered a trademark for my board game – now what?

Once you’ve successfully registered your trademark (or even before) your responsibilities do not stop there. You must be vigilant in stopping others from using names, logos, and designs that are confusingly-similar to your own. The first consideration is practical – what happens if a new game comes out and it’s universally disliked. If that name is close to yours, will players wrongly attribute those negative qualities to your game?

The courts also look at how many third parties are using similar trademarks in the marketplace as well. If many people are all using the same phrase or name, then consumers know to look more carefully when they are looking at a brand. So games like ‘Dice Forge’ and ‘Key Forge’ co-exist (for now at least) because many other games also use the word Forge.

While a trademark registration will automatically help stop others from registering similar trademarks, only you, as the trademark owner, can stop them once the begin using it. The key here is to always monitor the marketplace. Look at new game announcements, forums, news articles. Make sure you know about the major players and new releases. Then, when a new release is announced that is close to your name, you can reach out to them during pre-production and ask them to choose a different name. You should also monitor Kickstarter, Indiegogo and any other places where new games are developed and funded. By catching issues early, you can avoid an unpleasant and expensive legal proceeding further down the road and avoid ruining relationships with fellow publishers and developers. As mentioned in the very beginning of this article, many developers are simply not thinking of their name as something that could damage someone else’s intellectual property. Many times, a friendly discussion can head off issues and avoid future disputes.

But eventually you may need to enforce for rights in a more direct and aggressive fashion. However, enforcement letters should not be written while angry and all options should be considered before making legal claims against someone else. A hasty, angry email can often do more harm than good, making sides dig in their heels in a dispute that otherwise could have been settled quickly.

Again, an experienced trademark attorney who knows the industry can provide recommendations on how to proceed. There is no one right answer – it all depends on the facts of each case and, especially, whether the brand is in imminent danger of being damaged. It also depends your own tolerance for risk and potential legal action.

Whether it’s your first game or 50th, trademark rights are important for any size game designer. By effectively protecting your trademark rights, you can set up your game for long-term success and avoid pitfalls that could cost significant time and money to deal with. Whenever possible, consult with an experienced trademark attorney on the best way to protect your trademarks.

Eric Perrott can be reached directly at eperrott@gerbenlawfirm.com or through our site’s contact form.

Eric Perrott, Esq.
Eric is a trademark and copyright attorney committed to providing high-quality legal services for any sized budget. Eric’s ability to counsel clients through any stage of trademark and copyright development and protection allows him to provide his clients with personalized advice and unique analysis.Eric can be reached directly at: eric@gerbenlawfirm.comThe contents of this blog are for informational purposes only and may not be relied on as legal advice.
Go to Top