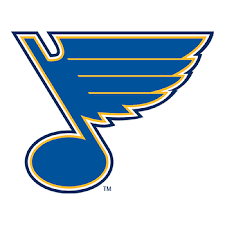 The St. Louis Blues currently compete in the Central Division of the Western Conference of the National Hockey League. The franchise was one of the 1967 expansion and is fondly named after the W. C. Handy song “Saint Louis Blues.” The Blues are quite a successful team and have qualified for the playoffs in all but nine seasons and played in the Stanley Cup four times. However, despite their consistency, the team struggled to win the Cup until 2019, and as such were the last active team from the 1967 expansion to win it all.

The Blues have had a reliable attendance, and even in a year without a playoff appearance, the franchise averaged a 98.6% attendance, which is 18,883 fans, in their Enterprise Center arena. The team has not only had a steady attendance, but they have had the same blue and white jersey with the “Blue Note” crest and gold accents. At some points in the history, the team added red in different places, but they typically reverted to the blue, white, and gold.

The Blues have a tradition of live organ music at their games, and obviously the team plays the Saint Louis Blues song by W. C. Handy at every home game. The franchise also plays “When the Saints Go Marching In” and replaces the word “Saints” with “Blues.” Since music is such a rich part of the team’s history, On October 1, 2018, a local St. Louis band “The Urge” wrote a song for the team that would be played after every goal.

Despite the opportunity for the team to protect some of these important parts of their brand, they have only registered the name and a couple logos, such as the note, a trumpet, and a silhouette of the arch. The team has not filed for any trademarks relating to its 2019 Stanley Cup Victory, the team nicknames, or even the song written for the team “The Blues Have the Urge.”

IC 041. US 100 101 107. G & S Entertainment services, namely, organization and presentation of professional ice hockey exhibitions and games rendered live and through radio, television, the Internet and other broadcast mediums; organizing and conducting community street hockey and ice hockey youth and adult programs and competitions; entertainment services in the nature of live musical and dance performances provided during intervals at sports events. FIRST USE: 20150600. FIRST USE IN COMMERCE: 20150600.