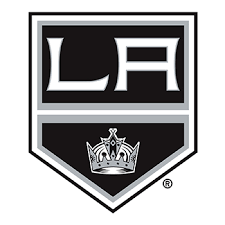 The LA Kings are Los Angeles’ NHL team playing in the Pacific Division of the Western Conference. The team was founded in 1967 after LA was awarded one of the six expansion teams in 1966. The Kings had great regular season years in the 1970s and 1980s, but the franchise could not turn the records into playoff titles. In the Kings’ more recent years, the team has had better luck and has managed to win two Stanley Cup Championships in 2011 and 2013.

The LA Kings debuted wearing purple and gold uniforms – like the LA Lakers – and a more detailed crown logo. These logos and words were registered as trademarks before the total rebrand in 2011. The first time the team started to introduce the black was in the 1995 season, but unfortunately, the black and silver had become associated with gang colors, so the team reverted to purple-silver-and white in 1998. This happens to be the same color of the NBA Sacramento Kings. The switch back to black and white as the team’s official colors happened in 2011, but the team has been using purple jerseys on “Legends Nights” and the teams’ 50th Anniversary to pay homage to its founding.

Despite the Kings’ multiple jersey changes, since most of the changes focus on color, there has not been a need to trademark multiple logos or word marks. The team registered its original crown, its name, and its crest. After 2000, though, the team did not register a new logo until the 2008 logo which is the one we see today. Overall, the 12-mark trademark portfolio could be stronger if the team chose to register common phrases or even the mascot – Bailey the Lion.

Filling Date:
2008-05-12
Registration Date:
2009-09-08
Current Basis:
1A
Owner:
The Los Angeles Kings Hockey Club, L.P.
Attorney of Record:
Thomas H. Prochnow
Description of Mark:
(3) Illustration: Drawing or design which also includes word(s)/ letter(s)/number(s). The mark consists of The letters "L" and "A" in a box and a kings crown in a downside triangle.
Type of Mark:
Trademark
Register:
Principal
Live or Dead:
ACTIVE